The WoW! programme includes ‘health champions’ from the community and community-based organisations who help to promote healthy, active lifestyles.  After the Train-the-Trainer course, each WoW! Wellness Champion was required to train at least 10 other people from their community group.

FATHERS CAN MAKE A CHANGE

As part of the Family Unit Participative Conference, Mhani Gingi hosted a 5-day Fatherhood Training Workshop in Cape Town from 20 to 24 November 2017 for organisations who participated in the conference.  The initiative was for male delegates who are interested in forming support groups and becoming support group facilitators – with a specific focus on new or soon-to-be fathers in their communities.

The Fatherhood Training Workshop was presented by Nils Pettersson.  He has worked with the Swedish organisation, Men for Gender Equality, and has conducted similar initiatives in Latvia, Poland, Burkina Faso, Zambia and other countries.

The objective was to begin fathers’ groups in different organisations, said Pettersson.  Participants were trained how to conduct groups. The 14 participants who attended, from all over South Africa, were all interested in a project to involve, engage and inspire fathers, in order to empower women and children, said Pettersson.

The workshop content created awareness about gender issues in family life and explored the local context to create material for use in fathers’ group meetings.

“The main objective with this work is to empower women and children and (to encourage) a non-violent approach. Men have to take on more of the unpaid work in the home and care-giving of children. By engaging men in a positive way as equitable partners and good fathers, we can achieve a change not only for women and children but also for men themselves,” said Pettersson.

Mhani Gingi Social Entrepreneurial Network, in collaboration with Swedish partners 1.6 Million Club Sweden and Yennenga Progress, are hosting a Family Unit Participative Conference in Cape Town from 17 to 19 August 2017 aimed at co-creating solutions that after the conference will feed into ongoing efforts directed at preventing the violation of the rights of women and children and strengthening the family unit.

This initiative to help promote the health and safety of women and children and eradicate gender-based violence includes among its planned outcomes the formation of support groups for mothers and fathers.

“Mhani Gingi wishes to contribute to enhancing the role of duty-bearers, community leaders, other non-governmental organisations also involved in this plight, government departments and service providers to improve the human rights and safety situation in the Western Cape.

“The focus will be on uniting women and men from different backgrounds to ensure a renewed emphasis is placed on women’s health, restoring their dignity, empowering them economically and ensuring safety of the vulnerable within our fragile communities,” said Lillian Masebenza, Founding Director of Mhani Gingi Social Entrepreneurial Network.

The participative conference will focus on areas that experience high contact crime rates, including Khayelitsha, Gugulethu, Nyanga/Philippi, Langa, Uitsig in Ravensmead, Manenberg and surrounding areas.  Service providers and other stakeholders already operating in these areas are being engaged with a view to reclaiming safe community spaces and enhancing joint efforts.

A voice against violation of the vulnerable

“The problems of violence in our society necessitate the need for a holistic, integrated and inclusive project to highlight the importance of the functional Family Unit.  This is a big challenge in that many ‘families’ are child-headed,” Masebenza said. 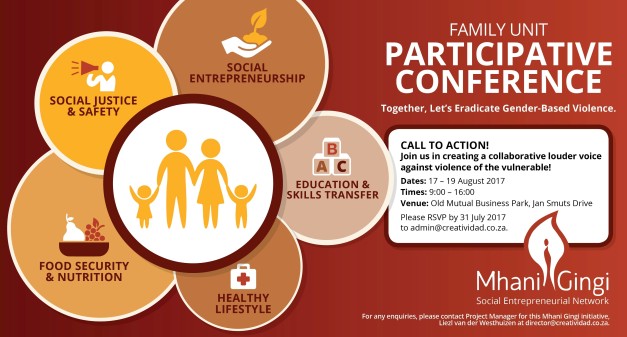 “This project’s focus is a holistic and integrated approach, making the Family Unit, in whichever form, its point of departure.  Its strength will be on networking with existing services, organisations, political leaders and other entities already functioning within these areas to come together as one voice against violation of the rights of women, children and the vulnerable,” Masebenza said.

For 14 years Mhani Gingi had focused mainly on women, youth, children at Early Childhood Development facilities, as well as on People with Disabilities (PWDs).  An additional focus would be a proactive approach to preparing soon-to-be or new fathers and men in general to understand their roles and take up the responsibility to care for and protect their children and the mothers of their children, she added.

The conference will bring together about 300 delegates over the three days to share and showcase success stories or community-grown initiatives, identify current challenges, and formulate pro-active strategies to address issues flowing from the conference.

The participative conference will encourage interaction between the audiences and speakers so that discussions lead to implementable, co-created solutions and collaborative outcomes.  Important to note is that the work of this project will be ongoing towards establishing a programme, Masebenza said.

Experts from Sweden are among the speakers.  The 1.6 Million Club Sweden, which promotes women’s health, will fund the initiative together with Yennenga Progress, an organisation serving as an accelerator for development.  For further information, willingness to get involved or support for this project, contact Project Manager for Mhani Gingi on the initiative, Liezl van der Westhuizen, at +27 (0)21 531 8577 or +27 (0)82 373 0971.  Or e-mail director@creatividad.co.za.

An organization focusing on issues around women´s health and lifestyle